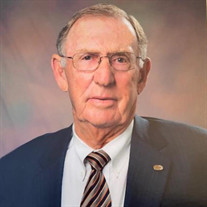 William Marcus Cook, 89, of Gray Court, SC, passed away peacefully at home on Monday, November 8, 2021, surrounded by his family. For 69 years, he was the beloved husband of Joan Willis Cook. He was the son of the late William Rapley “Dutch” Cook and Louise Cheek Cook. He was also predeceased by his younger brother, Edward Cheek Cook. Marcus was born in Laurens County and was a lifelong resident of Gray Court. After graduating from Gray Court-Owings High School, he was drafted by the US Army and served at Fort Jackson. After service he began farming with his father, and they formed W.R. Cook & Son. They owned and operated a cotton gin in Owings, SC. Later, Marcus was known for growing peaches and strawberries in Laurens County and raised cattle and hogs. He was co-owner of Marcus Cook Farm & Garden Center, LLC. He loved the farming life and everything about it. Marcus had a life well lived and enjoyed. One of his favorite sayings was “We work hard and play hard”. Marcus served on the Board of Directors of Laurens Electric Cooperative for 39 years. During his tenure at LEC, he served on the Boards of the Electric Co-ops of South Carolina and Cooperative Electric Energy Utility Supply (CEE US). In addition, he served on the Advisory Board of The Palmetto Bank for 29 years. Marcus was a lifelong and faithful member of Friendship Baptist Church in Gray Court. Through the years he served as Deacon and Secretary of Sunday School. Marcus is survived by three children: Beverly Cook Wiggins and her husband John of Holly Hill, SC, Cindy Cook Davis and her husband Alton of Waterloo, SC, and Marcus E. “Marty” Cook and his wife Laura of Gray Court; seven grandchildren: Will Patterson (Heidi) of Laurens, Joanna Wiggins Hart (Adam) of Columbia, Jack Wiggins (Athena) of Holly Hill, Hannah Patterson Styles (Adam) of Laurens, Lauren Cook of Laurens, Drew Cook (Samantha) and Curry Cook of Gray Court. He was also Mark Mark to his eight great-grandchildren: William and Madelyn Patterson, Addie Cook Hart, Willow and John L. Wiggins, Charlie Styles and Emery and Gray Cook. A celebration of the life of Marcus Cook will be held on the grounds of Friendship Baptist Church, Gray Court, SC, with seating, on Wednesday, November 10, 2021, at 3:00 p.m. The family will receive friends after the service. Special thanks to the many faithful caregivers over the past three years, and to the staff of Hospice of Laurens County. Pallbearers will be Will Patterson, Jack Wiggins, Drew Cook, Adam Hart, Adam Styles, and Charles Thomas. Memorials may be made to Friendship Baptist Church, Cemetery Fund, 3436 Friendship Church Road, Gray Court, SC 29645 or Hospice of Laurens County, 1304 Springdale Drive, Clinton, SC 29325. Gray Funeral Home of Laurens

William Marcus Cook, 89, of Gray Court, SC, passed away peacefully at home on Monday, November 8, 2021, surrounded by his family. For 69 years, he was the beloved husband of Joan Willis Cook. He was the son of the late William Rapley &#8220;Dutch&#8221;... View Obituary & Service Information

The family of William Marcus Cook created this Life Tributes page to make it easy to share your memories.

Send flowers to the Cook family.