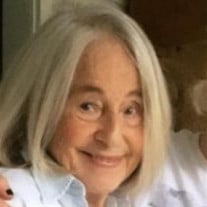 Wiley Davis Forte, age 79, passed away Wednesday, October 30, 2019 at her home. Loving Mother, Sister, Aunt, Grandmother, Great Grandmother, Cousin and Friend. At a young 79 years of age, Wiley was taken into Jesus’s arms and left this troubled earth due to extreme heart failure. We believe the last three years are a gift because she was truly a miracle. She departed us while working in the garden that she loved so much! We believe she wanted it this way because this is exactly where her Dad had his last moments here. We celebrate that she is in eternity with her loving Heavenly Father as well as her earthly mother and father that preceded her in death. Wiley was the oldest child of Lawrence Fuller Davis and Wiley Harris Davis. She was born February 15, 1940. She graduated from Clinton High School and Winthrop College. She loved writing and was an English teacher in Charleston, S.C. where she met Fred Forte who was a Naval Officer on the Clamagore which is now a museum ship at Patriots Point. They married and had her surviving children Lawrence Forte, Maria Forte Lyon and Bayon Forte. Hard times ahead dealing with wounds and damaged relationships and being a single mom to her three children. She struggled through finding work, but found a way to study entomology at Clemson University. It proved to be too hard to juggle with life and costs but pushed along with life encouraging her kids in church attendance and faith-also some Bible memory! Her passion was gardening, cooking, reading, drawing art and writing. And with the help of her ex-husband Fred she was able to print out beautiful cards that she created. She had a dream of that as a business. She had so many creative ideas. She was wonderful at sending letters to all of us to show her love. Wiley was a dedicated lover of her entire family who went out of her way to provide emotional, spiritual and physical support whenever illness or bad news struck. She was a prayer warrior and learned to stay anchored in God’s Word and Love during this storm called LIFE! She is also survived by her ex-husband Fred, two sisters MaryBelle Smith (Abney Smith) and Trecie Richey, in-laws Malissa Forte, Greg Lyon, Katie Forte as well as Grandchildren James Forte, Ida Forte, Wyeth Forte, Robert Lyon (Lindsay Lyon), Carly Lyon Nevins Josh Nevins), Haley Lyon as well as great grandchildren Ezra, Ivy and Abel Lyon. Wiley always had it in her heart to make small donations to organizations that give God’s Word along with physical needs. It would honor her if any heartfelt gifts were sent to Compassion https://www.Compassion.com/estate-and-asset-giving/memorial-gifts.htm and/or Thornwell https://Thornwell.org/make-a-donation/ in lieu of flowers or gifts! A Graveside Memorial Service will be held Wednesday, November 6th, at 11:00 AM, at Pinelawn Memory Gardens. Condolences may be expressed online at www.grayfuneralhome.com Gray Funeral Home of Clinton

The family of Wiley Davis Forte created this Life Tributes page to make it easy to share your memories.