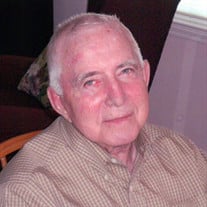 Wesley Aubrey Leonard, age 93, of Clinton, South Carolina, widower of Georgia Corbett Leonard passed away on Sunday, July 19, 2020. Mr. Leonard was also predeceased by his granddaughter, Susannah Elizabeth-Ellen Kwee; his nephew, Darrel Carl Leonard; his niece, Grace Cockman Hugo; and his sisters, Beatrice Leonard Cockman and Velma Leonard Skeen. He was born in Randolph County, North Carolina, he was the son of the late Reverend Wesley Merritt Leonard and Hattie Lee Lambert. Mr. Leonard attended the University of Alabama, he was a veteran of World War II having served in the United States Army as a Corporal with the HQ CO 351st Infantry. He was awarded the World War II Victory Medal; Occupation Medal; Italy. After his Honorable Discharge, he was employed with F.W. Woolworth Company for more than thirty-three years, retiring in 1982 with his last store posting in Northwood, Ohio. He and Georgia then moved to Clinton, South Carolina. Mr. Leonard worked part-time for Adair’s Men’s Shop in downtown Clinton. Later, he owned and operated Shealy’s Florist along with his late wife for fourteen years. He was a member of the First Baptist Church of Clinton. He is survived by his daughters, Sylvia Leonard (Steve) Kwee of Rocky Face, Georgia and Georgia Lynne (Jim) Revelos of Columbus, Ohio; his son, Wesley Mark (Ronda) Leonard of Clinton; his grandchildren, Rachel (Angel), Mary, James, Andrew (Anne), Alex (Fadwa), Christina (Ryan), Wesley Daniel (Laura), and Mark, as well as six great-grandchildren; his brother, Carl H. Leonard of Clinton. A Private Service will be held Saturday, July 25, 2020 at the Gray Funeral Home Chapel of Clinton with interment to take place at Pinelawn Memory Gardens. Pallbearers and Honorary Pallbearer are his grandchildren. The family would like to thank Rev. Dr. Blake Harwell, the Care Team, and VIP’s of the First Baptist Church of Clinton for your many years of kindness, concern, visits, and faithfulness to our loved one over these years of challenges. Also our family would like to thank Dr. Michael Bernardo, Dr. Stan Walsh, Dr. Pete Partee, Dr. Christopher Peterson, Dr. Kristin Derrick, and Frances Perdue, PA for their many years of compassionate care. Thank you to everyone that has assisted our loved one these past fifteen years. Memorials may be made to the First Baptist Church of Clinton, PO Box 95, Clinton, SC 29325; Hospice of Laurens County, PO Box 178, Clinton, SC 29325; or Meals on Wheels-Piedmont Agency on Aging. Gray Funeral Home of Clinton

The family of Wesley Aubrey Leonard created this Life Tributes page to make it easy to share your memories.

Send flowers to the Leonard family.