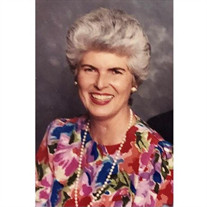 Virginia Gray Vance, widow of Robert Mercer Vance, died peacefully at home with family by her side Friday, August 28, 2020. She was 92 years old. Born in Laurens, South Carolina on July 29, 1928, Virginia was the daughter of L. Russell... View Obituary & Service Information

The family of Virginia Gray Vance created this Life Tributes page to make it easy to share your memories.

Send flowers to the Vance family.