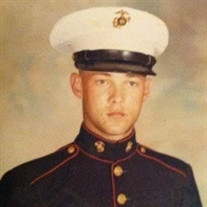 Tony Curtis Wyatt, age 68, passed away Thursday, October 7, 2021 at Self Regional Healthcare. Mr. Wyatt was born in Abbeville, SC and was a son of the late James Melvin Wyatt and Helen Wyatt Fleming. Tony worked at Clinton Mills, was a Veteran of the United States Marines Corp and attended the First Assembly Church. He loved his fur-babies Cocoa and Spike. Tony enjoyed spending quiet time at home listening to all genres of music. Some of his favorites he enjoyed were by Shania Twain, Carrie Underwood and many good old gospel songs but Tony was known to like a little “Boogie Shoes” for in his younger days he was known to cut a rug. Music was truly healing to his soul. He is survived by his sons, T.J. Wyatt (Carleigh) of Greenwood and Chad Wyatt; his grandchildren, Landon Irvine, Collins Wyatt Grace Wyatt and Liam Wyatt; his brother, J.D. Wyatt (Kim) of Cross Hill; and his sister, Wanda Pitts (Henry) of Clinton and many beloved nieces, nephews and cousins. In addition to his parents, he was predeceased by a brother, Larry R. Wyatt and a sister, Bonnie Sue Owings. A Memorial Service will be conducted Sunday, October 24, 2021 at 3:00 PM at the Gray Funeral Home Chapel of Clinton. The family would like to thank the healthcare providers, especially the ER staff, ICU team and Nursing staff of Self Regional Healthcare for their loving care and kindness they provided for Tony. In lieu of flowers the family request that memorials be made to the Humane Society, P.O. Box 1600 Clinton, SC 29325; CMT Research Foundation, PO Box 105, Glenolden, PA 19036 or a charity of your choice. Condolences may be expressed to the family at www.grayfuneralhome.com Gray Funeral Home of Clinton

The family of Tony Curtis Wyatt created this Life Tributes page to make it easy to share your memories.

Send flowers to the Wyatt family.