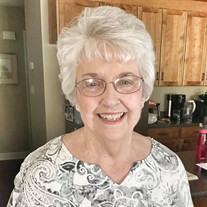 Ruth Turner York, age 81, of 1 Martha Franks Drive, Laurens, South Carolina left her earthly home on Wednesday, July 10, 2019 and joined her Lord and Savior Jesus Christ for eternity in Heaven. She was born on March 26, 1938 to Floyd and Veda Turner in Marshall, Texas. At four years of age, her family relocated to Alexandria, Louisiana and joined Emmanuel Baptist Church. She was a graduate of Bolton High School and loved to tell the story of going from her daddy’s arms to those of the handsome young Airman she met at Emmanuel. She and Buzz York were married there on March 2, 1957 and continued to be involved members. They built their lives in Alexandria, Louisiana for more than 59 years and enjoyed many wonderful friendships along the way. He was the love of her life and preceded her in death on May 31, 2019. In her early years, Ruth worked for the Louisiana Baptist Convention. When her daughters were young, she was a homemaker, but later returned to the workforce in the Music Ministry office at Calvary Baptist Church where she and Buzz were members for more than 30 years. They were active in both Emmanuel and Calvary fellowships where Ruth especially enjoyed using her beautiful soprano voice to serve in the youth and adult choirs. Upon moving to Laurens, SC in 2016, Ruth and Buzz joined First Baptist Church of Laurens. She was a devoted daughter, mother, grandmother and friend who always had a kind compliment for those who crossed her path. She could make even a perfect stranger comfortable and her joyful laugh will be forever etched in the memory of all who knew and loved her. Most of all, Ruth adored Buzz. They will be most remembered as a beautiful model of Christian marriage. Ruth is survived by her two daughters, Susan Carlay (Bo) of Laurens, SC and Julie Tadayeski (Jim) of Gainesville, GA as well as 5 grandchildren whom she treasured. She was preceded in death by her parents and one brother, Raymond Turner (Edna). There will be a casual visitation and time of remembrance in The Prayer Garden adjacent to The Villa at Martha Franks on Saturday, July 13, 2019 from 6:30 - 8:30 PM. In the event of rain, visitation will be held in The Rasor Chapel at Martha Franks. A service celebrating the lives of both Ruth and Buzz will be held in Alexandria, Louisiana on Saturday, July 27th, 2019 at 11 AM at Calvary Baptist Church in the chapel with visitation following in Calvary Hall. The family wishes to thank Hospice of Laurens County for their loving care of Ruth in her final days and also the many caregivers and residents at Martha Franks Retirement Community who have been like a family to her. We are also grateful to the staff and members of FBC Laurens for their steadfast love and support of both Ruth and Buzz. We ask that memorials be made to the Calvary Baptist Church Music Ministry, 5011 Jackson Street, Alexandria, Louisiana 71303 or Hospice of Laurens County, P.O. Box 178, Clinton, S.C. 29325 or FBC Laurens, 300 West Main Street, Laurens, SC 29360. Gray Funeral Home of Laurens

Ruth Turner York, age 81, of 1 Martha Franks Drive, Laurens, South Carolina left her earthly home on Wednesday, July 10, 2019 and joined her Lord and Savior Jesus Christ for eternity in Heaven. She was born on March 26, 1938 to Floyd and... View Obituary & Service Information

The family of Ruth Turner York created this Life Tributes page to make it easy to share your memories.

Send flowers to the York family.