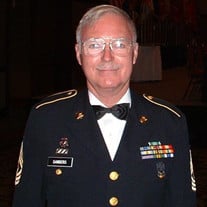 Richard M. Sanders, 73, passed away on Wednesday, September 18th at Hospice of Laurens County in Clinton, SC. He was pre-deceased by his parents, Thomas Leroy and Clara Poole Sanders of Clinton, SC, and his brother, Steven M. Sanders of Clinton, SC. His survivors include his wife, Judy Sanders of Clinton, SC, children Robert of Clinton, SC, and Clara(Brian) of Suffield, CT, brothers Tom Sanders(Rosemary) of Gilbert, SC, and Tim Sanders of Greenwood, SC, nephews Stephen Sanders of Los Altos Hills, CA, and Pastor Mark Sanders(Katherine) of Gilbert, SC, nieces Laura Riley(Tripp) of Columbia, SC, Karen Green(Chip) of Simpsonville, SC, sister-in-law Lynne Rutter(Ken) of Biloxi, MS, and niece/nephew-in-laws Chrissie Rutter of College Station, TX, and Bryan Fast(Katy) of New Port Richey, FL. Rick was a graduate of Newberry College and Florida State University. He served as a band director at Lexington County Schools and Florence County Schools in the 1970s. He filled many roles at Laurens School District 55 Maintenance Dept. for over 40 years. In 2007, he retired from the 246th Army Band of the South Carolina Army National Guard, Columbia SC. He served as First Sergeant for over half of his 40 years in the National Guard and traveled and performed throughout South Carolina, to West Point Military Academy, The Dominican Republic, Guam, Alaska, and Hawaii with the 246th Army Band. All four of the Sanders brothers served in the 246th Army Band, and Tom, Rick, and Tim each retired from service there. Rick was a kind and loving husband, father, brother, and a friend to everyone. He was a dedicated member of the community, his church, and a patriotic American. The visitation, funeral, and graveside services will be held on Saturday September 28th, 2019, at Pinelawn Memory Gardens Chapel, 28808 Hwy 76 E, Clinton, SC, 29325. Visitation will begin at 1:00pm. Funeral services will begin at 2:00pm.

The family of Richard M. Sanders created this Life Tributes page to make it easy to share your memories.

Send flowers to the Sanders family.