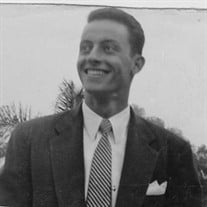 Richard Charles Kastory (Dick) was born August 29, 1934 in Montgomery, Alabama and died June 1, 2020, at 85. He spent most of his youth in Tennessee where he attended The Baylor School. Dick played football, basketball and golf there and was active in the Glee Club. He attended The University of Tennessee where he joined Lambda Chi Alpha (treasurer), was on the track team and obtained a degree in statistics. He also earned a MBA at UT Chattanooga and a PhD at the University of Georgia. While at UT he met Dana Dow and they married in Knoxville. He and his family moved to Winter Park, FL in 1965 where Dick worked for IBM for many years. Later he served as corporate secretary and international board member of REPCO Inc. He was active in Orlando serving on the Central Florida Capital Funds committee, as Division Chairman for United Appeal, as Vice President of the Data Processing Management Association, as President and then Chairman of the Board of Junior Achievement of Central Florida, as a builder for the Florida Sheriff’s Youth Ranches, a supporter of the Georgia Sheriff’s Youth Ranches and was a Rotarian. He retired to Eatonton, GA but soon found himself called back to work at Georgia College and State University where he taught computer science and business courses. He volunteered as treasurer at Eatonton Presbyterian Church. Dick was an avid golfer and fisherman and eventually retired again to Ormond Beach, FL. Dana passed in 2005 after 45 years of marriage. He eventually remarried Marilyn Dumm Dickinson and returned to Winter Springs, FL. He is preceded in death by his parents Charles Kastory and Lewise Williams Kastory and his wife Florence Dana Kastory. Dick is survived by his spouse Marilyn Dumm Kastory of Winter Springs, FL. His daughter Kelley K. Willis and her husband Scott, and their children Savannah and Chance of Dallas, TX survive him. He is also survived by his daughter Kirsten K. Dunton, her husband Dean, and their children Dow and Redford of Wake Forest, NC. His sister Carla Kastory McDougle of Nashville, TN survives him as well. To honor his life a graveside service will take place in Clinton, SC on July 8th, 2020 at 10AM in the Rosemont Cemetary. Condolences may be expressed to the family at www.grayfuneralhome.com

Richard Charles Kastory (Dick) was born August 29, 1934 in Montgomery, Alabama and died June 1, 2020, at 85. He spent most of his youth in Tennessee where he attended The Baylor School. Dick played football, basketball and golf there and... View Obituary & Service Information

The family of Richard Charles Kastory created this Life Tributes page to make it easy to share your memories.

Send flowers to the Kastory family.