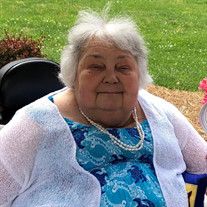 Ramona York Skinner of Clinton, SC passed away on Saturday, December 19, 2020 at the Presbyterian Home of Clinton, under the care of the Laurens County Hospice. She was loved by all who had the pleasure of knowing her. Her life was one of commitment, sacrifice, and resilience. Ramona Ann York was born on May 13, 1939 in Marietta, GA. She was the first daughter born to (Henry) Grady York and Maude Stamper York. She was followed two years later by a lifelong friend and confidante, her sister Brenda. Ramona showed early talent in music and art. She graduated from Osborne High School in 1957, then went on to North Georgia College in Dahlonega, GA . She majored in Secretarial Science there, and was a member of the Glee Club choir. And (after fending off many would-be suitors) also at NGC, she met the love of her life, (James) Lister Skinner III. Ramona and Jim were married in 1961, the year of Ramona’s graduation from North Georgia. They then moved to Fayetteville, AR, where Jim had already been since 1960, doing a Masters and PhD in English. While at Arkansas, Ramona worked part-time as a paid typist for the University and the rest of the time as an unpaid typist for Jim’s dissertation. The next stop for the couple was Mt. Clemens, Michigan, where Jim served at Selfridge Air Force Base. Ramona and Jim then moved to Clinton, SC in 1965, where Jim became a Professor of English at Presbyterian College . Ramona immediately became a memorable hostess for the classes that Jim often held at the couple’s home. She became active in the Clinton Music Club and in the League of Women Voters. There were extensive summer travels throughout Europe with friends and family, which generated a lifelong passion in for the British Isles, as well as a love for Greece. The couple’s one child, Jimmy, was born in 1970. Motherhood for Ramona involved constant care of house and home surely, but also active engagement of her son while her husband worked long hours preparing for class. Her creative mind and sheer enthusiasm for life and learning have been and will continue to be an inspiration to her son and to others. She continued to sacrifice for her family by being a primary driver for two-hour commutes to private school for Jimmy in the early to mid-1980s. Ramona was diagnosed then with multiple sclerosis, and began to fight with relentless determination and implacable will. The disease did, however, advance rapidly in the late 1980s. She continued to serve as classroom muse to her husband’s English teaching--she was often cited as inspiring his love for Romantic poetry. Even in declining health and diminishing mobility, she went along as her husband traveled doing research for several books. She made the best of this---serving as an invaluable assistant in content development of, and proofreading for, four books. Jim, only shortly after his retirement from PC in 2003, showed signs of encroaching Alzheimer’s. Ramona, even as MS had now forced her to use a walker, she kept her husband (and son) sane, as the disease began to progress. The couple moved to Clinton Presbyterian Home assisted living in 2009. Jim moved to skilled nursing in 2010, and Ramona visited him every day, for almost the whole day. Then, after breaking a foot, she moved in with her husband in skilled nursing for the last few years of his life---and served as a constant advocate and indefatigable caregiver for him. In the four years that she lived after her husband’s death, Ramona made friends more readily than ever before, with a great many of those dear friends being her caregivers at the Presbyterian Home. The late and deep love of her life-- which doubtless gave her several more years on this Earth-- was her first grandchild, Eleanor Josephine, whose first six years of life were a delight. Being able to meet her infant granddaughter, Millie Margaret born in April of 2020, was a blessing. Seeing Millie grow over Facetime brought great joy to Ramona’s final days. Ramona Skinner, such was the breadth of her grace, hated very little of what the world generated, as long as that something or someone did not hurt her family. She loved Luciano Pavarotti, crème brulee, Claude Monet, William Morris, Harrod’s Department Store, Walker’s Shortbread, Stilton Cheese, handbags of all persuasion, and almost every flower that she ever saw. Ramona is survived by her sister, Brenda York Scott of Marietta, GA; her son, James Lister Skinner IV of Decatur, GA (Sarah); granddaughters, Eleanor Josephine Skinner and Millie Margaret Lucille Skinner; brothers-in-love (and sisters-in-love): Rev. William Wirt Skinner of Canton, NC (Torpy); brother, Thomas Fry Skinner of Charlotte, NC (Linda); brother, Arthur Norvell Skinner of St. Petersburg, FL (Katrina); and nine nieces and nephews with their children. No memorial service will be held at this time owing to the COVID-19 pandemic. A private family graveside service, followed by interment, will occur December 29th at Mountain View Park Cemetery in Marietta, GA. In lieu of flowers, the family requests that donations in Ramona’s memory be made to either the Presbyterian Home of Clinton, SC at 801 Musgrove St. 29325; the First Presbyterian Church of Clinton, SC (http://www.fpcclinton.org/, or the Laurens County Hospice http://www.hospiceoflaurenscounty.com/ Gray Funeral Home (https://www.grayfuneralhome.com) and Mayes Ward Dobbins Funeral Home in Marietta, GA (www.mayerwarddobbins.com) are in charge of arrangements. Condolences may be left on either funeral home website.

Ramona York Skinner of Clinton, SC passed away on Saturday, December 19, 2020 at the Presbyterian Home of Clinton, under the care of the Laurens County Hospice. She was loved by all who had the pleasure of knowing her. Her life was one of... View Obituary & Service Information

The family of Ramona York Skinner created this Life Tributes page to make it easy to share your memories.

Send flowers to the Skinner family.