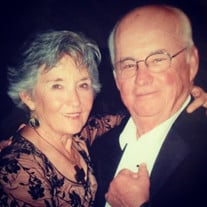 Peggy Martin Turbeville went to be with her Redeemer on May 2, 2021. She was born on August 26, 1934 to Virginia and Obis Martin of Marianna, Florida. Peggy was predeceased by her parents and younger brother Max Martin, as well as her beloved husband. She married James Clyde Turbeville in 1956. Peggy was a faithful and loving mother to her three children, Reverend Dean (Nancy), Jenni Turbeville Wilson (Andy), and Rebecca Turbeville Anderson (Robert). She is survived by her children, grandchildren, and great-grandchildren: Rebekah Turbeville Shillinglaw (husband Brad and children Hadley and Ezra), Aaron Turbeville (wife Mollie and child Matilda), Lydia Grace Turbeville, Mary Wilson Cowand (child Amelie), Virginia Talbert Wilson, Andrew Moore Wilson, Jr, Gray McLendon Wilson, James Clyde Anderson (wife Francesca and child Lawrence), Jessie Anderson Broome (Stephen). Peggy had a humble beginning in a small Florida town. Her father was an ex- professional boxer and died when she was a teenager. Peggy committed herself to education and excelled in nursing school, where she made friends that lasted a lifetime. She accepted the invitation of her future mother-in-law to date a shy but handsome young man from Camden, South Carolina, and that relationship became the epic marriage of Clyde and Peggy. Together, they sought to transcend the pettiness and racism that pervaded much of their environment and taught their children that all people have dignity and worth. Peggy has heavenly communion now with countless people who, while on earth, were impoverished and had to depend on the visitations of the Home Health Nurse from their county health department (Peggy helped develop the ﬁrst Home Health Care program in the state of South Carolina). She will also commune with those who once had profoundly disordered minds and spent much time in the mental institution in which she worked for years, but who now see with perfect clarity how God used a deeply compassionate woman to nurse them in their helplessness and advocate for them in courageous ways. As a master gardener, Peggy will love life in the new heavens and the new earth. She is also now reunited with the great love of her life, Clyde, whose death two years ago seemed to trigger her own physical decline. A vast network of friends, including those caregivers who came to know her over the last several years, and who so admired and trusted and enjoyed Peggy, will now be blessed by the treasured memory of her. Her children will continue to be strengthened by her example and challenged by her amazing work ethic and complete lack of self-pity. Her grandchildren and great-grandchildren will so miss their "T-Mama" whose love and delight in them ﬁlled them with joy. While she would have been impatient with such praise of her character and person, Peggy was truly an honest, charming, stately, intelligent, and giving woman. Few people can manage being as opinionated and as gracious at the same time as Peggy always was. We praise God for the life and loves of Peggy Martin Turbeville. We bless him that he worked a simple faith in his Son into her heart, and that she loved to be prayed for and truly looked forward to her heavenly reward. Soli Deo Gloria! Memorials may be made to Hospice of Laurens County. The family will be forever grateful to Laurens Hospice for their tender loving care of Peggy. There will be a private family burial at Quaker Cemetery in Camden, South Carolina. Gray Funeral Home of Laurens

Peggy Martin Turbeville went to be with her Redeemer on May 2, 2021. She was born on August 26, 1934 to Virginia and Obis Martin of Marianna, Florida. Peggy was predeceased by her parents and younger brother Max Martin, as well as her beloved... View Obituary & Service Information

The family of Peggy Martin Turbeville created this Life Tributes page to make it easy to share your memories.

Peggy Martin Turbeville went to be with her Redeemer on May 2,...

Send flowers to the Turbeville family.