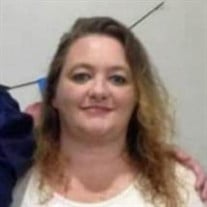 Mary Sonya Nicole Greene, age 43, of Clinton, SC passed away Saturday, July 17, 2021. Sonya came into the world January 25, 1978 in Clinton, SC and was loved the moment we laid eyes on her. She was a daughter of Lemuel C. Greene, III and step-mother, Sarah, and Katherine L. Deadwyler. As she grew, her personality began to shine. She was very outgoing and always ready to make new friends. She was a wealth of knowledge, she rarely had to open a book because things came to her naturally. She had tons of mechanical abilities like her Dedda. She had a crazy love for ketchup and thought it belonged on everything. She was a jokester and would do anything to make people laugh. She was the girl everyone wanted in their corner because she was tough as nails. She loved with everything she had. As time passed, she became the mother to three beautiful children, Asten, Chase, and Mason. As more time passed, Sonya began to fight with many demons and struggled to stay on the right path. Slowly the fight became harder and harder for her. And on July 17, 2021 God saw fit to rescue Sonya from the demons and give her the peace she so desired. Baby Sis, Our hearts are shattered, we were not prepared for this separation. We look forward to the day we are reunited. Until then, know we love you, BIG! This world will never be the same without Greene Girl #4. In addition to her parents she is survived by sons, Asten Lawson of Laurens and Mason Holbert of Clinton; her daughter, Chase J. Holbert of Clinton; her granddaughter, Rose A. Holbert; her sisters, Sherri D. Greene Davenport (Mike Cogsdill) of Clinton, Melissa Greene McLendon (Teddy) of Clinton, Mechelle Greene Rogers (Jay) of Clinton; her brother, Wade Nelson (Vonda) of Waterloo; numerous nieces and nephew and great-nieces and nephews; and numerous aunts and uncles. Funeral Services will be held Tuesday, July 20, 2021 at 3 PM at the Fountain of Faith Baptist Church with burial to take place at Pinelawn Memory Gardens. The family will receive friends prior to the service at the church from 2 to 3 PM. Gray Funeral Home of Clinton

Mary Sonya Nicole Greene, age 43, of Clinton, SC passed away Saturday, July 17, 2021. Sonya came into the world January 25, 1978 in Clinton, SC and was loved the moment we laid eyes on her. She was a daughter of Lemuel C. Greene, III... View Obituary & Service Information

The family of Mary Sonya Nicole Greene created this Life Tributes page to make it easy to share your memories.

Send flowers to the Greene family.