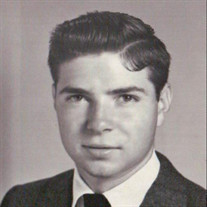 Copeland Whitmire passed away at his home on Monday, January 4, 2021. He was born November 5, 1940 and was the middle child of Judson Whitmire and Althea Slayton Whitmire. He is survived by his wife of sixty years, Diana Spencer Whitmire. He is also survived by his two sons, Marion (Bill) Whitmire of Atlanta, GA and Greg (Mary) of Boston, MA and one grandson, Spencer Whitmire of Boston MA. One brother, Frederick Whitmire and one sister, Sara Whitmire Gilliam. He was predeceased by his brothers James Clyde Whitmire and Frederick Whitmire; and his sister Patsy Whitmire Bowers. Copeland was a graduate of Clinton High School and Presbyterian College. He went on to complete a masters degree at Southeastern Baptist Seminary in Wake Forest, NC. Upon completion of his education he entered the military as an officer and chaplain in the U.S. army and served in Vietnam. After completing his military service he brought his family back to South Carolina. First to Columbia where he worked in the insurance field and then in 1973 back to Clinton where he began his kitchen cabinet business. His long hours and hard work helped make his business successful over the next thirty five years. He built his family’s home subcontracting much of the work out and competing the finishing details himself. Both his sons remember well the summer of 1975 when they didn’t go to the beach for vacation but instead spent what seemed at the time ‘forever’ filling and sanding nail holes in trim work. They both survived it and made it to the beach the next year. Patience and kindness made Copeland who he was. Anyone who knew him also knew that he had the patience of a saint…enough said. Copeland had a great sense of humor that his sons did not appreciate until they were older. He taught at least one if not both of his sons to not take themselves too seriously. The ability to laugh at yourself and make fun of your family (sometimes) is indeed a gift. Copeland will forever be remembered for the hard work, and sacrifices he made and the unconditional love he had for his family. Rest In Peace dad. We love you. Condolences may be expressed to the family at www.grayfuneralhome.com Gray Funeral Home of Clinton

Copeland Whitmire passed away at his home on Monday, January 4, 2021. He was born November 5, 1940 and was the middle child of Judson Whitmire and Althea Slayton Whitmire. He is survived by his wife of sixty years, Diana Spencer Whitmire.... View Obituary & Service Information

The family of Marion Copeland Whitmire Sr. created this Life Tributes page to make it easy to share your memories.

Copeland Whitmire passed away at his home on Monday, January...

Send flowers to the Whitmire family.