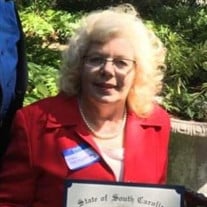 Maria Lillian Williamson McMurtury, 64, of Whitmire, wife of Marty Eugene McMurtury, died Wednesday, March 10, 2021 at her home. Born on January 7, 1957 in Queens, NY, she was the daughter of Wilfred and Kathleen Hannaway Williamson, Sr. She lived in Whitmire for several years during her childhood, later moving back to New York. From 1977 – 1979, she began pursuing community involvement by becoming a Big Sister through the Big Brothers Big Sisters of America organization in New York. From 1980 – 1997 she was a nurses aid, helping hospital patients when needed. She later moved back to Whitmire to raise her son. She married Marty on August 17, 2002. In 2003 she opened Maria’s On Main – a restaurant and gift shop. Also that year she started the First Community Outreach Program, which donated food and assistance to people in need. In 2013 she became the site director for Harvest Hope Food Bank in Whitmire and served in that capacity for several years. She also worked through the RSVP – Retired and Senior Volunteer Program – of the Midlands. Maria started Whitmire’s Economic Development Committee in 2013 where she served as director for several years. She also served on the board for Keep Newberry County Beautiful. In 2011 she was diagnosed with Charcot Marie Tooth Disease, a form of Muscular Dystrophy that deteriorates the muscles. Maria did not let this slow her down and she continued her community involvement for many more years. On September 16, 2016, Maria was awarded the Community Leader Volunteer Award at the annual South Carolina Governor’s Volunteer Awards banquet. In addition to her husband, she is survived by a son Efrain “E. J.” Ruiz, Jr. (Jasmine Regehr) of Butte Montana; sisters Kathleen “Susie” Keighron of Monks Corner and Barbara Williamson of Myrtle Beach; brothers Wilfred Williamson (Jennifer) of Stafford, Virginia and Ricky Stein of Boca Raton, Florida; an aunt Isabel Williamson of Apex, NC; a godson Caleb Wilson of Cowpens; Raylin Vicars, who Marty and Maria babysat and was their “adoptive granddaughter”; and many loving cousins from the Williamson, Ellison and Veneziano families. Besides her parents, she was predeceased by a brother Kenneth Joseph Williamson. Services will be held Monday, March 15, 2021 at 2:00 PM at Gray Funeral Home Chapel in Whitmire with burial in the Whitmire Cemetery. The family will greet friends the hour before the service from 1:00 to 2:00 PM at the funeral home. Pallbearers are Billy Hollingsworth, Scott Cain, Chris Prince, Kevin Keighron, Jesse Baker, and Todd Collier. Honorary pallbearers are Jeff Vandegraft and Bo Ellison. The family would like to express special thanks to Judy Ward for all of the help and care she has shown to both Marty and Maria. Memorials may be made to First Church of God, PO Box 333, Whitmire, SC 29178. Condolences may be expressed online at www.grayfuneralhome.com Gray Funeral Home of Whitmire

The family of Maria Lillian Williamson McMurtury created this Life Tributes page to make it easy to share your memories.

Send flowers to the McMurtury family.