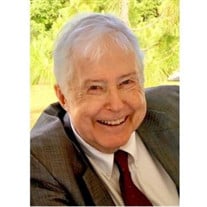 Dr. Louis Moore Stephens Sr. age 90, passed away Thursday, January 14, 2021 at the Hospice and Palliative Care of the Piedmont in Greenwood. He was born September 28, 1930 to Sara Cathey and John Reuben Stephens, Sr. of Canton, North Carolina. He was a Distinguished Military Graduate of Clemson College in 1952 where he was Regimental Commander of the Clemson College Cadet Corps his senior year. He spent three years in Regular Army, as an Infantry Officer, part of that time in Korea. He returned to Clemson for a 1956 Master’s degree, then married Lillian Salters Dillard of Clinton. Graduating from the Medical College of South Carolina in Charleston in 1960, he interned in Macon, Georgia and completed his Family Medicine residency at Charity Hospital in Alexandria, Louisiana. He practiced Family Medicine in Clinton, SC for thirty five years. During that time, he practiced with the late Dr. George Blalock and the late Dr. Ralsa Fuller. The last eight years of his practice was with his son, Dr. Louis Stephens Jr. He served as Chief of Staff of Bailey Memorial Hospital, President of Laurens County Medical Society, Chairman of Clinton Housing Authority, President of the Chamber of Commerce, President of the YMCA Board, team physician for Clinton High School and Presbyterian College football teams, Deacon, Elder, and Elder Emeritus of First Presbyterian Church, Co-Founder of Laurens County Chapter of Ducks Unlimited, Board of Advisors of American Federal Bank, President of Laurens County Forestry Association, Master Tree Farmer, and Master Gardener. He received an Honorary Degree in Public Service from Presbyterian College. He was predeceased by his wife, his parents, and his two brothers. John Reuben Stephens Jr. and William Kerr Stephens. He is survived by three sons, Lou (Debbie), Gary (Sharon), Tom (Michelle), all of Clinton, five grandchildren, Louis III (Marisa), Dillard (Haley), Sara Olivia, Bailey and Adaline, and one great-grandchild, William Gray. During these difficult and challenging times, the family will be planning a private family service due to the recent rise of COVID cases in our community. They thank you for your understanding and support during their time of grief and loss. In lieu of flowers, memorials may be made to First Presbyterian Church, 410 East Carolina Ave., Clinton, SC 29325, or Hospice of Laurens County, P.O. 178, Clinton, SC 29325. Condolences may be expressed online at www.grayfuneralhome.com Gray Funeral Home of Clinton

The family of Dr. Louis Moore Stephens Sr. created this Life Tributes page to make it easy to share your memories.

Send flowers to the Stephens family.