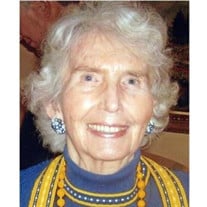 Lois Elisabeth Graf Wilson, 97, a resident of Clinton Presbyterian Community, died there February 1, 2022. She was born in West Grove, PA May 14, 1924, to the Rev. Charles Earl Graf and Elisabeth Helen Mayhew Graf. Her mother was the first woman to receive credit for courses at Princeton Theological Seminary. Her husband, Col. Samuel Mack Wilson, PhD, preceded her in death in 2002, as did her brother, Bayard, and sisters Ellen and Marcia. She is survived by her son Samuel Mayhew Wilson, MD and his wife Dorothy H.B. Wilson, granddaughters Elisabeth H. Wilson and Mary J. Wilson, and many nephews, nieces, and great nephews and great nieces. She graduated from high school at age 16 and from Maryville College, TN at age 20 in 1945 and taught science and home economics at the junior and high school level for several years at Abington Friends School. She played cello in high school and college and was in the Collingswood Orchestra, N.J. for a year after college while her husband was in China with the US Marine Corps after World War II. She carried her cello between Philadelphia and college on the new train, the Chattanooga Choo Choo. Well into her 80’s she regularly attended Philadelphia Orchestra concerts. She brought a love of classical music to the family. She lived for many years in Glenside and Abington, PA. She was active for over 60 years as a member of Abington Presbyterian Church, Abington, PA and served as lay leader of several organizations at the church as well as Elder. She and her husband taught high school Sunday School for 10 years. Recently she had attended All Saints’ Episcopal Church, Clinton, S.C. with her son and daughter-in-law. She moved to Clinton Presbyterian Community at age 91 to be closer to her family. She was grateful for the care she received there. She was a member of DAR for 74 years, was the Organizing Regent of the William Penn Chapter in Glenside, PA at age 30, and led several national committees including Constitution Week and Motion Picture, Radio, and Television. She was known for her organizational skills and determination. She was DAR State Chair of the Constitution of the U.S. Bicentennial Committee and had a major role in the commissioning of the original painting “The Signing of The Constitution”, by Louis S. Glanzman, in 1987. The painting, which is notable for its accuracy, hangs at Independence National Historical Park in Philadelphia. She saw that a copy was placed in the Reception Room of the Chief Justice of the U.S. Supreme Court and in the courthouse of each of the State Supreme Court Buildings, as well as courthouses throughout Pennsylvania. She was local judge of elections for 25 years. She had a love of history, genealogy, needlepoint, sewing, refinishing antiques, and entertaining. She was involved for many years in PEO, A.A.U.W, and Temple University Faculty Wives Club. She was on the Women’s Board of Arcadia University. She and Mack loved flower and vegetable gardening and she enjoyed arranging flowers until her last days. She routinely and excellently prepared fresh vegetables from his garden. She loved cool summer evenings at the patio and sitting before the fire after dinner. She loved adventure and learned to ski and to sail at age 38. She hiked several overnights on the Appalachian Trail in her late 40’s. She was a loving grandmother to her granddaughters, Liz and Mary. She fostered keeping the extended family connected through family gatherings. Her life touched many people. She was known for her smile. A Memorial Service will be held 10:30 AM Thursday, March 31, 2022 at the Clinton Presbyterian Community Chapel. An additional Memorial Service will be held 11:00 AM Saturday, July 9, 2022 at Abington Presbyterian Church, 1082 Old York Rd., Abington, PA 19001. In lieu of flowers, memorials may be made to Abington Presbyterian Church, 1082 Old York Rd., Abington, PA 19001; All Saints’ Episcopal Church, 505 Calvert Ave., Clinton, S.C. 29325; or Clinton Presbyterian Community, 801 Musgrove St., Clinton, S.C. 29325. Gray Funeral Home of Clinton is assisting the family with arrangements.

Lois Elisabeth Graf Wilson, 97, a resident of Clinton Presbyterian Community, died there February 1, 2022. She was born in West Grove, PA May 14, 1924, to the Rev. Charles Earl Graf and Elisabeth Helen Mayhew Graf. Her mother was the first woman... View Obituary & Service Information

The family of Lois Elisabeth Graf Wilson created this Life Tributes page to make it easy to share your memories.