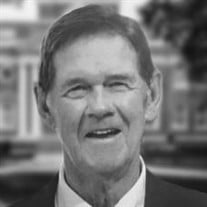 Joseph Oscar Nixon, age 81, beloved husband, father, and grandfather, died at Hospice of Laurens County in Clinton, SC on Tuesday, August 24, 2021, closing the final chapter of a life de-fined throughout by Amazing Grace. Joe was born in rural Thomasville, Georgia, and grew up in Carrollton, Georgia, as part of close extended family and small town neighborhoods where he found his own true strengths. He was a graduate of Carrollton High School class of 1958, and Presbyterian College class of 1962, where he a was a member of the 1960 Tangerine Bowl team, a brother and president of Pi Kappa Alpha fraternity, and received an ROTC US Army commission in 1963. Following active Army duty, he returned to his alma mater to coach football and track under Coach Cally Gault. During Joe’s 37 year career at PC, he served as coach, director of admissions, dean of students and vice president for student life. He earned a Master’s Degree in Student Personnel Services from the University of South Carolina in 1978. In 1980, he was inducted into the Carrollton High School Athletic Hall of Fame. In 2002, The South Carolina College Personnel Association honored him by establishing the Joseph O. Nixon Award for Chief Student Affairs Professionals. In 2013, PC bestowed the title Vice President of Student Life Emeritus for his loyal service to the college. Following his active military service, Joe remained in the South Carolina Army Reserve National Guard, and retired in 1996 as Commander of the 228th Signal Brigade with the rank of Brigadier General. During his military service, he received numerous awards and citations, including the Legion of Merit. In 2011, he was inducted into the Presbyterian College Military Hall of Fame. He embraced the Clinton community and participated on various local boards in early years, later chairing the Bailey Foundation Scholarship Committee, and delivering Meals on Wheels in retirement. He served as deacon and elder at First Presbyterian Church of Clinton where he remained an active member for 56 years. Throughout life, he continued to pursue his love of the game on local and distant courts and golf courses until impeded by Parkinson’s. Joe is survived by his wife of 58 years, Mica Brock Nixon; his daughter, Tracie Nixon Scar-borough and husband Ray Scarborough, of Clinton; his son Joseph Bryant Nixon and wife Stacy Barton Nixon, of Greenville, SC; and grandchildren, Joseph Rabun Scarborough, Molly Scar-borough Pitts and husband Kendall, Emma Barton Nixon, Sam Brock Nixon, and Mary Elizabeth Nixon. He is also survived by two brothers, Dr. William Harold Nixon and wife Jo Kenimer Nixon of Spartanburg, SC, and Howard Copeland Nixon and wife Sue Scott Nixon of Carrollton, GA., as well as a host of nieces, nephews, and extended family members. In addition to his parents, Oscar Lee and Bessie Copeland Nixon, he was preceded in death by his only sister Jenny Nixon Sheffield. The family is indebted to Dr. Patricia Sadler, weekly caregivers Kayla Spearman and Carolyn Roberts, and the entire staff of Hospice of Laurens County, for extraordinary and compassion-ate support during Joe’s illness. A Memorial Service will be held in the sanctuary of First Presbyterian Church, Clinton on Saturday, August 28 at 11:00 am following a family service of committal in the church cemetery. An informal time to speak to the family will be held in the church fellowship hall immediately following the service. In accordance with current guidelines as adopted by the session, those attending are requested to wear face masks indoors. The service will also be live-streamed on the church website at www.fpcclinton.org. In lieu of flowers memorial contributions may be made to First Presbyterian Church, PO Box 29, Clinton, SC 29325; Presbyterian College, 503 S. Broad Street, Clinton, SC 29325; Hospice of Laurens County, 1304 Springdale Drive, Clinton, SC; or the charity of choice. Condolences may be expressed to the family at www.grayfuneralhome.com Gray Funeral Home of Clinton

The family of Joseph Oscar Nixon created this Life Tributes page to make it easy to share your memories.

Send flowers to the Nixon family.