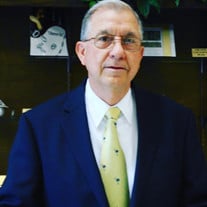 Joseph C. Carter, age 76, of Laurens, SC, went home to be with his Savior on July 21, 2020, in Laurens, SC. A Memorial Service will be held at 2 PM on Sunday, July 26th, 2020 at Temple Baptist Church with Pastor David Johnston of Temple Baptist Church, officiating. Due to the COVID-19 Crisis, only family members will be allowed to attend. Arrangements are by Gray Funeral Home. In lieu of attendance, prayers would be appreciated during this difficult time. Joe Carter was born in Gastonia, NC to Haskell and Ellen Carter on May 31, 1944. He served in the United States Army for 4 years prior to returning home and beginning his career as a jeweler. He devotedly worked for Kay Jewelers for 14 years, where he met his wife, Linda Carter who worked in a neighboring store. The two married on April 12, 1978 in Nashville, Tennessee. After 12 years with Kay Jewelers he and Linda moved to Laurens, South Carolina where he opened Carter Jewelers and became a bedrock of the Laurens community for (38) years. He was involved in the Laurens County GOP and was a member of the Laurens County Chamber of Commerce. He was recently recognized for his contributions to Laurens County with a Joint Resolution by the Laurens County Legislative Delegation. Joe is preceded in death by his father, Haskell Carter; mother, Ellen Carter; and sister, Norma Carnes. Joe is survived by his wife, Linda Carter, son Robert Carter, daughter Sharon Jones and her husband Chris, and son David Carter and his wife Ryann, brother Butch Carter and his wife Nancy, brother Bob Carter and his wife Joan, grandson Brian Carter his wife Alyssa and their children, Natalie and Valerie, and granddaughter Stephanie Bryant and her husband Jeremy and their children Hailey and Oakley. In lieu of flowers, the family asks for donations to be made to Temple Baptist Church’s Mission Fund. Gray Funeral Home of Laurens

Joseph C. Carter, age 76, of Laurens, SC, went home to be with his Savior on July 21, 2020, in Laurens, SC. A Memorial Service will be held at 2 PM on Sunday, July 26th, 2020 at Temple Baptist Church with Pastor David Johnston of Temple... View Obituary & Service Information

The family of Joseph C. Carter created this Life Tributes page to make it easy to share your memories.

Send flowers to the Carter family.