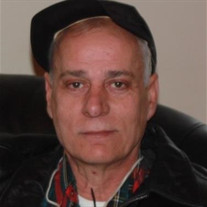 John McElroy Copeland, age 64 passed away Saturday, November 23, 2019 at his home. He was born in Clinton and was a son of the late James McElroy Copeland, Jr. and Elizabeth Lee Deyton Copeland. John proudly served his country in the United... View Obituary & Service Information

The family of John McElroy Copeland created this Life Tributes page to make it easy to share your memories.

Send flowers to the Copeland family.