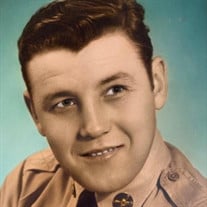 James “Jim” O’Brien, son of James Stephen O’Brien and Anna O’Keeffe O’Brien, passed away peacefully in his sleep Friday, April 2, 2021, at 92 years of age. He was the eldest of six children and a first-generation American Citizen born to Irish immigrant parents. He is survived by his wife, Gail, his two children, Cindy and Jamie, their spouses Joe and Kellie, his only granddaughter, Kenna Lynn, his brother, Bill, his sister, Patsy, as well as his nieces and nephews and their families. Jim spent his childhood in the Bronx, N.Y. and Tucson, Arizona. He enlisted in the Army out of high school and served as communications chief on Okinawa during the Korean War. While taking night classes at Fordham University, he began working with ITT, an international communications company, where he retired as personnel director after 35 years. Jim traveled extensively with his job, including Latin America, Europe, and Asia. When first married, he and Gail lived abroad in the Republic of Panama for four years, but home-base for the couple was New Jersey, where they lived for many years as they raised their family. The two would eventually celebrate 60 years together. Jim retired to Newberry County, SC, in 1985, where he enjoyed his family, friends, and neighbors, along with the sunny Southern climate. A people-person, avid reader, art collector and history buff, Jim loved hosting get-togethers in his 164-year-old historic home outside of Whitmire. Those who knew him and loved him will celebrate his generosity. His optimism. His boundless wit. His fiercely independent spirit. His mischievous zeal for life- and for sharing it with others. These qualities endeared him to so many. Memorial donations may be made in Jim O’Brien’s honor to The Wounded Warrior Project.

The family of James "Jim" O'Brien created this Life Tributes page to make it easy to share your memories.

Send flowers to the O'Brien family.