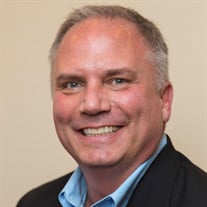 James Franklin Adair, 54, husband of Melissa Broadwell Adair, passed away on Tuesday, November 9, 2021, at Novant Presbyterian Medical Center in Charlotte, NC. Jim was born on January 12, 1967, at the American Air Force Base in Ruislip, England. He was the son of the late Duckett "Mac" Adair and the late Melanie "Mimi" Martin Adair of Clinton, SC. He grew up in Greenville, SC and Clinton, SC, graduating from Thornwell High School in 1985. He received a Bachelor of Science degree in chemistry in 1989 from Furman University, where he graduated as a second lieutenant in the United States Army from 1990-1993. Jim served in the 84th Chemical Company during Operation Desert Storm, where he was stationed at Fort Polk, Louisiana. He was later promoted to captain upon receiving an honorable discharge from the military in 1997. After leaving the army, Jim worked for Bregman & Co. In 1999, he received his Bachelor of Science degree in chemical engineering from the University of South Carolina and his Master’s Degree in chemical engineering from USC in 2001. He earned his professional engineering license, going on to work for Cryovac and BASF as an environmental engineer. During his time at BASF, he and his family had the opportunity to live in Germany for 3 years while Jim worked at the BASF headquarters in Ludwigshafen, Germany. With his job, Jim traveled extensively, from China and India to South Africa, Saudi Arabia, and Brazil. In addition, he and his family traveled all over Europe during their time there. In addition to his wife of the home, he is survived by a son, Stephen William Adair, a sister, Melanie Adair Johnson (Harold), and uncle, James R. Adair (Derrick), a niece, Sarah Ellen Johnson, and two nephews, Taylor Johnson and Jace Johnson. Graveside Services will be held, Saturday, November 13, 2021, at 11 AM, in the Rosemont Cemetery with Rev. Dr. Robert Austell officiating. The family will receive friends at the cemetery immediately following the service. Pallbearers will be Jim Adair, Larry Higgins, Harold Johnson, George Kady, Jim Teresi, and Dan Williams. In lieu of flowers, memorials may be made to First Presbyterian Church of Clinton, 410 E. Carolina Avenue, Clinton, SC 29325, or a charity your choice. Gray Funeral Home of Clinton

The family of James Franklin Adair created this Life Tributes page to make it easy to share your memories.

Send flowers to the Adair family.