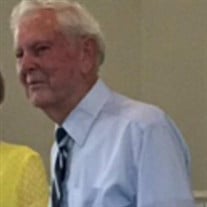 Jack Lamar Miller, age 92, husband of Carole Lanford-Miller, passed away Tuesday, February 22, 2022 at NHC of Clinton. Born July 26, 1929 in Wabash, Indiana, he was a son of the late Donald D. and the late Erma Faye Christine Hasse Miller. Jack was a graduate of Lakeville High School in 1947 he then attended Bethel University in Mishawaka, IN., and Valparaiso Technical Institute. During Jack’s engineering career he worked with the Studebaker Corp, Conn Organ, Leslie Speaker Corp, Hammond Organ, Hill-Rom. Following his retirement he moved to Myrtle Beach, SC. Jack was an electrical engineer, and later in his career he invented the “Posey Sitter”. In addition to his wife of the home, he is survived by his son, Kenneth and wife Amber; his daughter, Susan Diane Miller; his grandchildren, Jennifer Wilson and husband Frank, Connie Voris and husband Michael, Cassondra Friars and husband Anthony; seven great grandchildren; 6 great-great grandchildren; his brother Charles Miller, and Paul Miller; and many nieces and nephews. He was preceded in death, his daughter, Rebecca Sue Miller; his brother, Donald Miller. In lieu of flowers, memorials may be made to Davidson Street Baptist Church, 400 Davidson Street, Clinton, SC 29325. Gray Funeral Home of Clinton is assisting the family with arrangements

The family of Jack Lamar Miller created this Life Tributes page to make it easy to share your memories.

Send flowers to the Miller family.