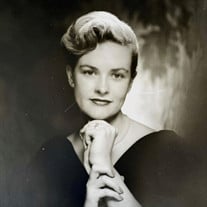 Helen Marie O’Reilly Harkins, 86, our mom, known as “Honey” to her family, passed away Monday, December 28, 2020 after a short illness of Covid-19 while residing at the Clinton Presbyterian Community, Clinton, SC. Helen was born in the Bronx, New York on April 26, 1934 to James Patrick and Helen Lanahan O’Reilly and was the fourth child and only girl. She attended Mount St. Ursula Prep School and graduated with a Bachelor of Science from the College of New Rochelle. She joined J.P. Morgan and quickly became their first woman executive. She married John “Skip” W. Harkins on May 16, 1959. Together, they raised their children mostly in Manhasset, NY and Atlanta, GA. As the children entered college, Helen began a 20-year career with Bank of America retiring in April 1999 as a Vice President of Trust. After retiring, she and Skip enjoyed fifteen years in Fernandina Beach, FL, but then moved to Clinton, SC in 2015 to be near their son. Helen was a loving wife and mother. She enjoyed playing bridge having learned it at a very young age and went on to win the Corporate City Bridge Competition while at J.P. Morgan. She also enjoyed golf, and doing Sudokus. She spent hours analyzing the market and making excellent investments. She is preceded in death by her husband, John W. Harkins, son, John F. Harkins, and her brothers Hugh and James. She is survived by her three children: Jeanne (Christopher) DeVita, Timothy (Angie) Harkins, and Catherine (Ken) Wills, and nine grandchildren: Riley Harkins, Anne Marie DeVita, Peter DeVita, Brandon Wills, Jack Harkins, Theresa DeVita, James Wills, Daniel Wills and Allison Wills; her brother Eugene (Dolores) O’Reilly and Edward (Donna) O’Reilly. Funeral arrangements will be announced in the future. In lieu of ﬂowers, please send donations to the Covenant House or Catholic Relief Services, two of her favorite charities. Gray Funeral Home of Clinton

The family of Helen Marie O'Reilly Harkins created this Life Tributes page to make it easy to share your memories.

Send flowers to the Harkins family.