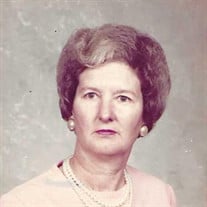 Dateline – Laurens, SC Helen Mae Mahon Hall age 89, widow of A.W. “Buck” Hall passed away Thursday, February 11, 2021 at her home in Laurens. She was born and raised in Laurens County and was a daughter of the late John Furman Mahon and Niza Mae Lindley Mahon. Helen retired from Southern Underwriters with 33 years of service and after her retirement she was employed with Eckerd Drugs in Laurens. She was a lifetime member of Henderson Baptist Church in Hickory Tavern where she held many positions and organized the senior adult program “Joy Club”. She was a former member of the Professional Business Women; the Laurens County Extension Homemaker’s Club, which she served as President for several years. Helen was a graduate of Lander College and was the last surviving member of the Hickory Tavern graduating Class of 1950. Surviving are a sister, Doris “Dot” Banks and husband Billy of Greenwood and a brother, Joseph “Joe” Mahon and wife Norine of Greenwood. In addition to her husband and parents she was predeceased by brothers, Furman Lewis Mahon, William Henry “Bill” Mahon, Carl Terry “Coot” Mahon, nephews, William Mahon Banks and Randall Scott “Randy” Mahon. Funeral services will be held Sunday, February 14th, 2021 at 2 PM at the Gray Funeral Home Chapel of Laurens with burial at Forest Lawn Cemetery. For everyone’s safety and health concerns the family will not have a traditional visitation, the body will be available for viewing the hour before the service from 1:00 to 2:00 PM on Sunday. The family would like to thank special friends, Ken and Sarah Taylor, Ken and Pat Britton, and Charles and Bonnie Lollis for their special care and friendship shown for Helen. In lieu of flowers memorials may be made to Henderson Baptist Church, 207 Henderson Church Road, Gray Court, SC 29645 or to the Hospice of Laurens County, PO Box 178, Clinton, SC 29325. The family will be at their respective homes. Condolences may be expressed online at www.grayfuneralhome.com Gray Funeral Home of Laurens

The family of Helen Mae Mahon Hall created this Life Tributes page to make it easy to share your memories.

Send flowers to the Hall family.