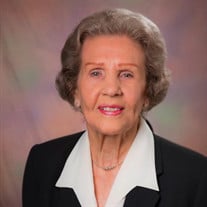 Helen West Abrams, age 92, widow of Cyril Abrams, passed away Sunday, February 7, 2021, at her home, and she was a loving and devoted mother of three children. Helen was born on December 30, 1928 in Union, SC and was a daughter of the late Ruby Lowe West and Frank Charles West. She had five siblings, Louise Kingsmore (Willis), Geneal Riley (Herbert), Woodrow West (Bessie), Raymond West, and Jack West (Dee Dee). Helen was a 1944 Graduate of Union High School where she was a Latin Scholar and excelled in business courses. She was also named “Prettiest Girl” of the Senior Class. After graduation, she moved to Columbia to work for the South Carolina Unemployment Commission. In 1948, she married, Cyril “Cy” Abrams of Silverstreet, S.C. and was married until his passing in 1979. Together they raised three children, Jean Christian (Jim), Eddie Abrams (Teresa), and Russell Abrams. In 1947, Cyril started the Gilder and Weeks Drugstore and upon his death in 1979, Helen became owner of the business which continues to serve the community to this day. Helen was a faithful member of the Joanna First Baptist Church where she taught generations of children. She was a Kindergarten Teacher at First Baptist for 17 years and taught 4 and 5 year old Sunday School for over 50 years. She also served on various committees at the church and regularly taught Bible School in the summer. She also was a faithful member of the Frances Watson Circle. Helen also worked at Whitten Center as an Administrative Assistant and served on the Board of Visitors for Self Memorial Hospital. She was the first woman to serve on the Board of the Laurens Electric Cooperative. She served 32 years and made many life-long friends. An accomplished Southern cook, Helen was noted for her macaroni and cheese pies at church functions. Helen has three grandchildren, Katy Scalise (Michael) and daughter of Jean and Jim of Greenville, Cy Abrams (son of Russell) of Greer, and John Trevino (son of Eddie and Teresa). In addition, she has five great-grandchildren, Elena and Dominick Scalise, Tyler, Reilly, and Erin Trevino. The family would like to give a special thanks to special friends who cared for her over these many months: Annette, Alisa, Angela, Barbara, June, Meneatrice, and Leticia. Also, to Dr. Lovelace and his staff for all their care and compassion. Due to COVID. there will be a semi-private service for family and invited friends only. In lieu of flowers, memorials may be made to the Joanna First Baptist Church, 301 Magnolia Street, Joanna, SC 29351. Condolences may be expressed to the family at www.grayfuneralhome.com Gray Funeral Home of Clinton

Helen West Abrams, age 92, widow of Cyril Abrams, passed away Sunday, February 7, 2021, at her home, and she was a loving and devoted mother of three children. Helen was born on December 30, 1928 in Union, SC and was a daughter of the... View Obituary & Service Information

The family of Helen West Abrams created this Life Tributes page to make it easy to share your memories.

Send flowers to the Abrams family.