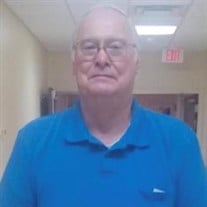 Glenn Duvall Smith, age 78, of Clinton, widower of Lamatrell Power Smith, passed away Monday, September 27, 2021, at Prisma Health - Laurens County Memorial Hospital in Clinton. He was born September 29, 1942 in Greenwood, SC, and was a son of the late John Richard Smith, Sr. and Melda Duvall Smith. Mr. Smith was retired from Asten Johnson and was a former employee of Community Cash. He was a member of Davidson Street Baptist Church and a member of Campbell Masonic Lodge # 44. Mr. Smith was survived by his daughter, Glenda Lamatrell Smith of Clinton; son, Mark Ashley Smith (Susanna) of Woodruff; grandson, Ian Smith of Greenwood; granddaughters, Samantha Davenport (Logan) of Clinton, and Savannah Bolduc (Jonathan) of Laurens; great-grandchildren, Hailey Davenport, Oliver Bolduc, and soon to be, Baby Bolduc; his brother, Fred Smith of Princeton; cousin, Jerry Duvall of Laurens; and sister-in-law, Myrna Mann of Spartanburg. In addition to his parents and wife, Mr. Smith was predeceased by a brother, John R. Smith, Jr., and a sister, Dr. Anne Elizabeth Smith Mack. Funeral Services will be held, Thursday, September 30, 2021 at 11 AM, at Gray Funeral Home Chapel of Clinton with Rev. Kenny Moore officiating. The family will receive friends one hour prior to the service at the funeral home from 10-11 AM. The family will be at the home, 801 E. Ferguson Street, Clinton, SC 29325. In lieu of flowers memorials may be made to Davidson Street Baptist Church, 400 Davidson Street, Clinton, SC 29325. Gray Funeral Home of Clinton

The family of Glenn Duvall Smith created this Life Tributes page to make it easy to share your memories.

Send flowers to the Smith family.