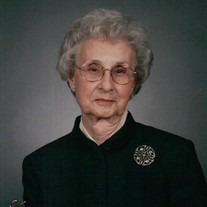 Frankie Edenfield, age 95, passed away Friday, April 10, 2020 at White Oak at North Grove in Spartanburg, SC. Born on the family farm near Savannah, Georgia, she was the youngest of three children. She is predeceased by her parents, E.F. and Ida Denmark; her sister, Hilda Pierce; her brother, James Denmark; and her son-in-law, Don Crain. Surviving are her daughters, Delila Crain of Knoxville, TN and Ida Rogers (Rick) of Boiling Springs, SC; her granddaughters, Dr. Frankie Crain-Ruf (Thomas) of Knoxville, TN and Dr. Emily Rogers (Kim) of Baltimore, MD; great-grandchildren, Eleanor and Elliott Ruf; and many nieces and nephews. After graduating business college, Frankie worked as a secretary at the Southeastern Naval Shipyard in Savannah, where she met her husband, the late John Edenfield. During the early years of their marriage, she was a homemaker, caring for their young daughters. Due to his career in retail store management, the family lived in several southeastern cities before settling in Clinton in 1967. After working ten years as a florist in Clinton, she taught horticultural therapy at Whitten Center greenhouses, retiring after ten years. Frankie enjoyed attending church, flower gardening, family beach vacations, shopping and spending time with friends. Those who knew her remember her helpfulness and sense of humor. Although Alzheimer’s affected her final twelve years, she enjoyed the company of others in assisted living. The family expresses appreciation to Hospice Care of South Carolina. A graveside memorial service will be held at a later date. Memorials in Frankie’s name may be made to the United Methodist Church of the Covenant, 9020 Asheville Highway, Spartanburg, SC 29316 or to the VIP’s of First Baptist Church, 301 S Broad Street, Clinton, SC 29325. Gray Funeral Home of Clinton

Frankie Edenfield, age 95, passed away Friday, April 10, 2020 at White Oak at North Grove in Spartanburg, SC. Born on the family farm near Savannah, Georgia, she was the youngest of three children. She is predeceased by her parents, E.F.... View Obituary & Service Information

The family of Frankie Edenfield created this Life Tributes page to make it easy to share your memories.

Send flowers to the Edenfield family.