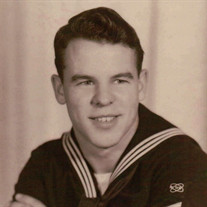 Frank Edward Eaton, passed away on April 24, 2019 at the age of 86 in Clinton, South Carolina due to congestive heart failure. Frank was born on July 28, 1932 in Atlanta, Georgia to Lollie Eaton (1910-1987) and Kelly Arthur Eaton, Sr. (1902-1954). Frank grew up in the Little Five Points area of Atlanta and met Jean Lanning at Bass High School. After graduation in 1950, Frank joined the US Navy. His service included being a petty officer on the USS Essex aircraft carrier in the Korean conflict. He and Jean married on May 30, 1952. Upon his honorable discharge in 1954, Frank worked in C-130 airplane manufacturing for Lockheed Corporation in Marietta, Georgia. He joined IBM in 1956 in Atlanta and was quickly promoted. The couple, now with their three sons, moved to Huntsville, Alabama in 1961 where Frank worked for IBM in support of the federal space program. In the fall of 1969, the couple, now with their four sons, moved to Louisville, Kentucky where Frank was the branch manager for IBM. Frank transferred to Raleigh, North Carolina in 1984 and retired from IBM in 1991. Jean passed away on January 21, 2017 after sixty-four years of marriage. Frank is survived by their son Frank Eaton, Jr. of Morgantown, West Virginia and daughter-in-law Tonda, their son Richard Eaton of Kinards, South Carolina and daughter-in-law Jill, their son Gary Eaton of Franklin, Tennessee and daughter-in-law Kenna, their son Clay Eaton of Raleigh, North Carolina and daughter-in-law Maria, as well as Frank’s brother Robert Eaton of Elberton, Georgia, Frank’s sister Kathryn Pye of Jonesboro, Georgia, and Frank’s sister Shirley Huey of Ft. Walton Beach, Florida. Frank is preceded by his older brothers James Eaton (1928-1996) and Kelly Eaton (1931-1996). Frank’s legacy also includes twelve grandchildren and twelve great grandchildren. A faithful husband and family man, he took great delight in the success of his loved ones and often expressed his pride regarding all of his relatives. He is remembered for his steadfast nature, wide array of natural abilities, and keen sense of humor. Frank enjoyed sailing, classical music, and his wife's cooking. He was a patriotic American, an avid fan of baseball, and a self-taught expert in British history. A Funeral Service will be held at Gray Funeral Home in Clinton on Sunday, April 28, 2019 at 2 PM. The family will receive friends prior to the service at the funeral home from 1 to 2 PM. By virtue of his status as a veteran, Frank will be buried at Salisbury National Cemetery on Monday, April 29, 2019, where Jean is interred as a serviceman’s wife. Gray Funeral Home of Clinton

The family of Frank Edward Eaton created this Life Tributes page to make it easy to share your memories.

Send flowers to the Eaton family.