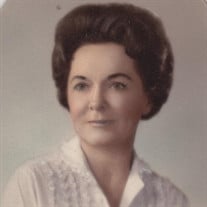 Frances Williams McSween, age 100, passed away at the Clinton Presbyterian Community on March 14, 2021. Frances was born on the Fourth of July, 1920, and was always pleased that the nation helped celebrate her birthday. She grew up in Chester, SC and graduated with a bachelor’s degree in music from Winthrop College in 1941. While there she met Harry McSween, a student at Presbyterian College who became the love of her life, and they were married soon after graduation. After Harry returned from army service overseas during World War II, they moved to Clinton in 1944 and raised a family. She was a long-time member of the First Presbyterian Church of Clinton. Always a musician, Frances taught piano for 30 years, was a member of the American Society for Composers, Authors, and Publishers, composed and published sheet music for piano, wrote and orchestrated musical productions with her daughter, and entertained many civic groups and other gatherings. She also composed “On, On PC”, the fight song of Presbyterian College. Frances was a loving mother, an inspiration to her family, and a popular friend of many. She was always positive, joyous, and brave, even in the face of adversity and advanced age. She was preceded in death by her parents Harry Marion Williams and Lucile Hood Williams, her husband Harry Younger McSween, her brother Harry Marion Williams Jr., and leaves her three children: Harry (Hap) Y. McSween Jr. (Susan) of Knoxville TN, Lucille M. Harper (Roland) of Rock Hill SC, and John R. (Dick) McSween (Nena) of Beaufort SC, as well as five grandchildren and nine great grandchildren. Memorial Services will be held Friday, March 19, 2021 at 4 PM at the Gray Funeral Home Chapel of Clinton. The service will be livestreamed and will be available to view by visiting Mrs. McSween's tribute wall on our website www.grayfuneralhome.com In lieu of flowers memorials may be made to the charity of one's choice. Gray Funeral Home of Clinton

Frances Williams McSween, age 100, passed away at the Clinton Presbyterian Community on March 14, 2021. Frances was born on the Fourth of July, 1920, and was always pleased that the nation helped celebrate her birthday. She grew up in Chester,... View Obituary & Service Information

The family of Frances Williams McSween created this Life Tributes page to make it easy to share your memories.

Frances Williams McSween, age 100, passed away at the Clinton...

Send flowers to the McSween family.