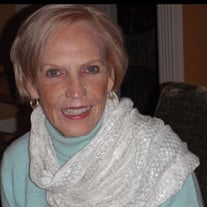 Flaudine (Flo) Adams died peacefully at her home in Clinton, SC on Sunday, Nov. 21, 2021. She was born a year before the great depression in the hills of Southwestern Virginia as the oldest daughter of 6 children to Roy and Grace Shortt. In high school she met the love of her life, Jim Adams, after he returned from WWII. They married in 1946 and raised two boys. They were married for 59 years until his passing in 2005. Flaudine lived in many places and homes, 6 of which were built by her and Jim. She filled those homes with antiques, card games, Willie Nelson records, chicken & dumplings, and stories of characters she knew growing up in her hometown of Pound, Virginia. She worked hard in all things. She gardened, baked, and told quick witted jokes. Flaudine was an excellent cook whose food and desserts highlighted many gatherings. She was the director and founder of the Dorchester County Council on Aging in Summerville, SC, a role she was most proud of. Flaudine had a gift for supporting those in need and always embraced the differences in people. In recent years, she enjoyed pushing the boundaries set by age. In her nineties, she ziplined through a cave, went to the gym, danced, drove four-wheelers, and gambled at Churchill Downs. Flaudine was a devoted mother who loved and cherished her children and grandchildren, who equally loved and cherished her youthful spirit. She will be deeply missed. She is survived by her two sons, John (Mary) of Clinton, SC and Jeff (Tammy) of Bowling Green, KY. She also is survived by four grandchildren, Ben (Jan) Adams of Louisville, KY, Sarah (Robey) Harris of Louisville, KY, Emily (Keith) Kuhn of Louisville, KY and Nathan Adams (Katherine) of Washington, DC, and four great-grandchildren, Sam, Hampton, James, and Avery, all from Louisville, KY. Also, surviving Flaudine is one sister, Sarah, and two brothers, Jimmy and Ronnie, and many nieces and nephews. Preceding her in death were her husband, Jim, and two brothers, Chester and Eddie. A celebration of Flaudine’s life will be held after winter thaws, in her hometown of Pound, VA. In lieu of flowers, the family appreciates donations to the Laurens County Safe Home, a home for victims of domestic violence. Donations can be made to: The Laurens County Safe Home, PO Box 744, Clinton, SC 29325 or online at thesafehome.org Gray Funeral Home of Clinton

Flaudine (Flo) Adams died peacefully at her home in Clinton, SC on Sunday, Nov. 21, 2021. She was born a year before the great depression in the hills of Southwestern Virginia as the oldest daughter of 6 children to Roy and Grace Shortt. In... View Obituary & Service Information

The family of Flaudine (Flo) Adams created this Life Tributes page to make it easy to share your memories.

Flaudine (Flo) Adams died peacefully at her home in Clinton,...

Send flowers to the Adams family.