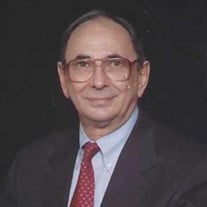 Everett Charles Rampey, age 87 of Laurens, passed away Saturday, July 31, 2021, at Prisma Health Greenville Memorial Hospital. Everett was born September 13, 1933 in Piedmont, SC and was a son of the late Harold James Rampey and Ernestine Garrison Rampey. Everett attended Belton High School and Clemson University. He served in the United States Army during the Korean conflict and was the retired owner and President of Armorform, Inc. and Carolina Yarn and Fabrics in Laurens. He was a Mason of the Clemson Lodge. Everett was a member of Green Pond United Methodist Church in Gray Court, SC. and was a life-long member of the United Methodist Church. He is survived by his wife, Sarah B. Rampey of the home and his son, Michael J. Rampey (Debbie) of Simpsonville; his daughters, Deborah R. Richardson (Eric) of Anderson, and Carol R. Snyder of Ninety Six. He was also survived by his four grandchildren, McCuen Rampey (Chelsea) of Anderson, Anna Kate Ballinger (David) of Fountain Inn, Kenneth Hardwick (Nacole) of Brevard, NC, and Hendrix Snyder (Sally Jane) of Beech Island, SC; also surviving are three great-grandchildren, Laurel and Allie Hardwick and Banks Rampey. He is survived by two sisters, Kay Goodwin (Thomas) of Greer and Maxine Mundy of Athens, Ga., and several nieces and nephews. Funeral Services will be held Wednesday, August 4, 2021, 3:00 pm at Gray Funeral Home Chapel of Laurens with burial to follow at Westview Memorial Park. The family will receive friends one hour prior to the service from 2-3:00 pm at the funeral home. In lieu of flowers memorials may be made to Green Pond United Methodist Church, 168 Stoddard Mill Rd., Gray Court, SC 29645. Condolences may be expressed to the family online by visiting www.grayfuneralhome.com Gray Funeral Home of Laurens

The family of Everett Charles Rampey created this Life Tributes page to make it easy to share your memories.

Send flowers to the Rampey family.