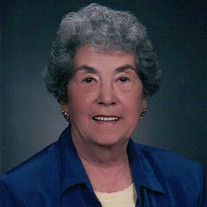 Eva Norma Spadoni Mills graduated to Glory on Wednesday, August 7th under the care of Hospice of Laurens County in Clinton, SC. Born on May 26, 1928 to Italian immigrants Attilio and Adelaide Spadoni in Sault Ste. Marie, Ontario, Canada, Eva met her late husband Brooks Martin Mills Sr. in “the Soo” while he was stationed there during World War II. She proudly became a United States citizen in May of 2000. Eva leaves behind five children, Brooks M. Mills, Jr. (Carol), North Augusta, SC; Rhonda Mills Cruickshanks (Sandy), Clinton, SC; Deborah Mills Renaldo (Butch), Little Switzerland, NC; Michael A. Mills (Sherrill), North Myrtle Beach, SC; and Beverly Mills Blalock, Clinton, SC; 14 grandchildren, and 23 great-grandchildren; one brother, Leveo Spadoni (Barbara), Sault Ste. Marie, Ontario. Eva retired after 56 years working in food service at Presbyterian College, first in Judd Hall and then in Greenville Dining Hall. In 2008, she was named an Honorary Alumna of Presbyterian College. She cherished the time she was able to spend with the many students with whom she came in contact while working in the Dining Hall. Eva received much recognition for her elaborate Christmas village she set up each Christmas for the PC Community and others. Eva and Martin enjoyed square dancing and camping in their Airstream and were members of Palmetto State Airstream Club. Eva enjoyed playing golf, bridge, reading, knitting and the piano. She served her community as a children’s Sunday School teacher, Cub Scout leader, and a volunteer at the Red Cross of Laurens County. She was a member of the Eastern Star and the American Legion Auxiliary. Eva was a member of the First Baptist Church and enjoyed traveling with the VIPs, and also the VIMs of Broad Street Methodist Church. The family will receive friends during visitation Saturday, August 10th from 1:00p – 2:00p at the First Baptist Church Sanctuary with a funeral service following at 2:00p officiated by Pastor Doug Shenton and Jim Caprell. Memorials may be made to the Scotsman Club of Presbyterian College, First Baptist Church Clinton, SC, Hospice of Laurens County (1304 Springdale Dr, Clinton, SC 29325), or the charity of your choice. Condolences may be expressed to the family at www.grayfuneralhome.com Gray Funeral Home of Clinton

The family of Eva Norma Spadoni Mills created this Life Tributes page to make it easy to share your memories.

Send flowers to the Mills family.