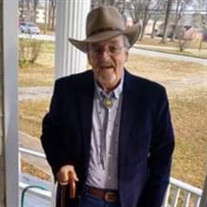 E.L. "Levi” Mason, age 88, of 502 Milton Road, widower of his beloved wife, Jolene H. Mason, passed away Thursday, April 21, 2022 at his home. He was born November 27, 1933 in Meridian, MS and was a son of the late Elbert Mason and Alma Ree Mott Mason. He was a founding member of the Board of Directors Rabon Creek Rural Water District, owned and operated the Joanna Phillips Station 66 for many years, and was a veteran of the United States Army. He was a proud Father, Grandfather, and Great-Grandfather. He is survived his son, Mike Mason (Donna) of Joanna; his daughter, Deronda Mason of Ware Shoals; his three grandchildren, Alan Mason, Kasey Mason, Ashley Kinard (Clark) and six great-grandchildren, Tyler McPeeks, Kaleigh Thompson, Caitlyn Mason, Michael Mason, Hunter Hanks, Kelley Hanks; his brother, Houston Mason; and special friend, Deborah Lewis. In addition to his wife and parents he is preceded in death by his son, Richard A. (Round) Mason, Sr, and his grandson, Richard A. Mason, Jr. Funeral services will be held Sunday, April 24, 2022 at 3 PM at the First Baptist Church of Joanna with burial to take place at Pinelawn Memory Gardens. The family will receive friends prior to the service from 2 PM to 3 PM at the church. Memorials may be made to Believers Assembly Church, 236 Little Acres Road, Clinton, SC 29325. Gray Funeral Home of Clinton is assisting the family with arrangements.

The family of E.L. "Levi" Mason created this Life Tributes page to make it easy to share your memories.

Send flowers to the Mason family.