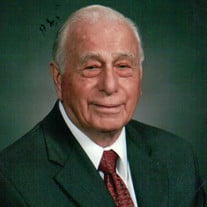 Donald Guy “Don” Creighton, age 95, husband of, Mary Frances Wheeler Creighton for 69 years, passed away Thursday, August 27, 2020 at the Hospice of Laurens County. He was born on April 4, 1925 in Atlanta, GA and was the son of the late James Guy Creighton and Jessie McDonald Creighton. He was a veteran of World War II, serving in Iceland in the Army Air Corps Transport Command in 1943-1946. He was a graduate of the University of Georgia, School of Forestry in 1951, he joined the International Paper Company in Arkansas. In 1953, he joined the Bowater Company and worked in Tennessee, Georgia, and South Carolina before retiring as district forester in 1987. He was a member of Broad Street United Methodist Church where he served as Sunday School Teacher, Lay Leader, and in many other capacities of the church. He served as President of several civic and service organizations one of which was the Clinton Family YMCA in its infancy. He was awarded the Man of the Year Award by the Clinton Lions Club in 1973. In addition to his devoted wife, he is survived by his son, Jim Creighton and wife, Shari of Greer; his daughter, Cathy Creighton Vecchiarelli and husband, Jim of Clifton, VA; and his four grandchildren, Jami Huguet and husband, Jason, Ross Creighton, Charles Creighton, and Matt Hyatt; and four great-grandchildren, Vivi, Jack, Sam, and Hank Huguet. A graveside memorial service will be held Monday, August 31st at 11:00 A.M. at Pinelawn Memory Gardens. In lieu of flowers memorials may be made to Broad Street United Methodist Church, PO Box 204, Clinton, SC 29325 or to the Hospice of Laurens County, P.O. Box 178, Clinton, SC 29325. Condolences may be expressed to the family at www.grayfuneralhome.com

The family of Donald Guy "Don" Creighton created this Life Tributes page to make it easy to share your memories.

Send flowers to the Creighton family.