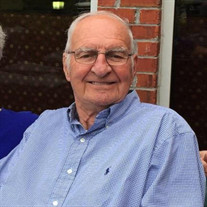 Derrill Owens Whitmire, age 88, of Joanna, passed away Thursday, October 1, 2020 at Self Regional Healthcare Hospital in Greenwood. He was married for 59 years to his beloved wife, Doris Whitmire. He was born in Joanna, SC on November 20, 1931, and was the son of the late Owens Whitmire and the late Clyde and Evelyn Atkins. After graduating from Clinton High School, he served in the US Navy during the Korean Conflict aboard the USS Salisbury Sound. Mr. Whitmire retired from Greenwood Mills after 35 years of dedicated service and then continued to work for American Securities until he was 80 years old. He was a lifelong member of the First Baptist Church of Joanna, where he served for many years as Deacon and Sunday School Teacher. He also enjoyed attending the Whitmire Pentecostal Holiness Church. He was a loyal member of the Joanna Men’s Club. He enjoyed spending time with his family and his grandchildren and great-grandchildren. He was also a faithful visitor to numerous nursing homes and lived to serve others. In addition to his wife Mr. Whitmire is survived by his daughter, Denise (Allen) Shaw of Newberry; son, Kenneth (Donna) Whitmire of Whitmire; sister-in-law, Mary Jo Holsonback of Joanna; grandchildren, Amy (Mayes) McEntire of Columbia, Allison (Michael) Plumblee of Aiken, Chelsea (Ian) Elsmore of Whitmire, Michael Shaw of Newberry and Robbie Cooper of Whitmire; great-grandchildren, Brielle, Laney, Silas, Riley, Micah, Evy and Harper. Graveside services will be held on Sunday, October 4, 2020 at 2:00 PM at Pinelawn Memory Gardens by Rev. Eddie Duncan and Mr. Buddy Bridges. The family will receive friends immediately following the service. Memorials may be made to the First Baptist Church of Joanna, 300 Magnolia Street, Joanna, SC 29351 or the Whitmire Pentecostal Holiness Church, 1325 Broom Street, Whitmire, SC 29178. Condolences may be expressed to the family at www.grayfuneralhome.com Gray Funeral Home of Clinton

Derrill Owens Whitmire, age 88, of Joanna, passed away Thursday, October 1, 2020 at Self Regional Healthcare Hospital in Greenwood. He was married for 59 years to his beloved wife, Doris Whitmire. He was born in Joanna, SC on November... View Obituary & Service Information

The family of Derrill Owens Whitmire created this Life Tributes page to make it easy to share your memories.

Send flowers to the Whitmire family.