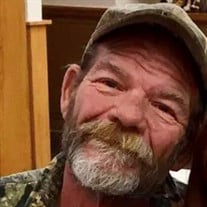 Derrick Keith Gilliam, age 65, passed away Sunday, February 23, 2020 at the Laurens Memorial Hospital. He was a son of Jeanette Stroud (Reuben Stroud) of Clinton and the late JB Gilliam. Mr. Gilliam is survived by his children, Amy... View Obituary & Service Information

The family of Derrick Keith Gilliam created this Life Tributes page to make it easy to share your memories.

Send flowers to the Gilliam family.