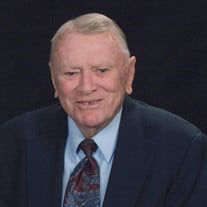 Dr. Davis "Bucky" R. Holland, Jr., age 83, passed away Sunday, March 28, 2021 at his home in Clinton, SC. He was born on April 13, 1937 and was the son of the late Davis "Buck" R. Holland, Sr., and Mary Chalmers Holland. With a BA, from Presbyterian College, Davis went on to get a Master’s from Furman and later a PhD from Florida State University. He enjoyed a 47 year career as Teacher, Public School Administrator, and Professor at Florida Southern College in Lakeland. His favorites were his dogs, family, FSU football, home, yard, and grill. Davis is survived by his wife, Ellen Holland of the home; his sister, Helen Hill of Clinton, SC; his son, Davis R. Holland, III (Kim) of PA; his daughter, Becky Hammond (Bob) NJ; his daughter-in-law, Terry Porter of FL; his son, Bill Elliott (Jennifer) FL; his twelve grandchildren and four great-granddaughters. In addition to his parents, he is predeceased by his sons, Robert Porter, Clark Whitney Elliot, and his brother-in-law, Bill Hill of Clinton. Graveside Services will be held Thursday, April 1, 2021 at 1 PM at Rosemont Cemetery in Clinton, SC. In lieu of flowers memorials may be made to the Broad Street UMC, PO Box 204, Clinton, SC 29325, or Florida Southern College in Lakeland, 111 Lake Hollingsworth Drive, Lakeland, FL 33801.

The family of Dr. Davis "Bucky" R. Holland, Jr. created this Life Tributes page to make it easy to share your memories.

Send flowers to the Holland, family.