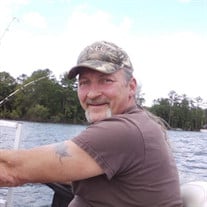 Darrell Wayland Gilliam, Jr., better known as “Pecker Head”, age 52, of 127 Minnie Prince Ln Whitmire, South Carolina, passed away Saturday, April 24, 2021. He was born in Union on February 27th, 1969, at Wallace Thompson Hospital and was the son of Gloria Strickland Gilliam and the late Darrell Wayland Gilliam, Sr. Mr. Gilliam loved the outdoors, a black pocketed t-shirt, blue jeans, a braid, and Marlboro reds. He spent most of his time hunting, fishing and with his loved ones. He was always there to lend a helping hand to anyone in need and he never met a stranger. He is survived by his mother, Gloria Strickland Gilliam; a son, Mark; two sisters, April Gilliam and Christie Swain, both of Whitmire; three nephews, Matthew, Alex, and Cameron; three nieces, Brianna, Alexis, and Hayleigh; and two great nieces Averly and Haisley. He was predeceased by his father, Darrell Wayland Gilliam, Sr of Whitmire; a special friend, April Frye of Batesburg; and is survived by his lifelong fishing buddy, Randy Kitchens of Whitmire. Visitation will be held on Wednesday, April 28th at Gray Funeral Home in Whitmire, South Carolina from 1:00 P.M. – 3:00 P.M. The graveside service will be held immediately following visitation at the Whitmire Cemetery. Gray Funeral Home of Whitmire

The family of Darrell Wayland Gilliam Jr. created this Life Tributes page to make it easy to share your memories.

Send flowers to the Gilliam family.