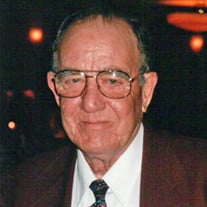 Clarence Olin “CO” Freeman, husband of Betty J Freeman passed away December 19, 2019 at his home. He was born December 10, 1933, in Wellford SC to the late Ed and Clara Freeman. A US Navy Veteran of the Korean War, he served on the USS Princeton as a Machinist Mate 3rd Class. In 1965 he started Southern Aluminum Foundry and Machine in his back yard and helped it grow to the company it is today. An avid motorcyclist, he was a Shriner Motor Cycle Escort for many years and served as captain in 1990. He and his wife Betty enjoyed traveling together, whether it was around the world or touring the United States on their motorcycle then later their RV. During their RV travels they met many people who became their RV family whom they love very much. In addition to his wife, he is survived by his son Steve Freeman and wife Toynja. Daughter, Darlene Brown and husband Lonnie. Two step-sons, Mike Dockins wife Kathy, and Brian Dockins and wife Nichole; Grandchildren, Christie Freeman, Devon Freeman, Michael Anne Dubiel, and Nick Brown; Step-grandchildren Shannon Stockin, Ashley Moore, Josh Dockins, Katelyn Dockins, Saderia Dockins and Aizik Dockins; Along with 8 Great-Grandchildren and 2 Great-Great Grandchildren. He was predeceased by a son, Charles I Freeman and sister, Mozelle Blackwell. The family will receive friends, Sunday, December 22, 2019 from 6 to 8 PM at the Gray Funeral Home of Laurens. In lieu of flowers donations can be made to the Shriners Hospital Greenville SC. The family would like to thank Hospice of Laurens County and their nurses for their compassion and care. Gray Funeral Home of Laurens

The family of Clarence Olin "CO" Freeman created this Life Tributes page to make it easy to share your memories.

Send flowers to the Freeman family.