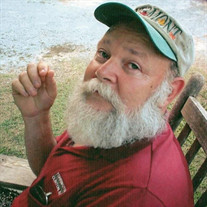 Charles “Pop” Edward Seymore, age 76, passed away Sunday, February 7, 2021 at his home. He was born on September 20, 1944 in Reno, SC and was the son of the late Alma Mae Seymore. Charles was retired from Torrington in Clinton. He was an active member of the Whitmire Rescue Squad for 56 years and spent several years in the Whitmire Fire Department. He was very involved with Whitmire Community School and the Whitmire Athletic Booster Club. He was a loving husband, father, grandfather, and brother. Pop spent his days in the outdoors teaching his grandchildren how to hunt, fish, cook, and ride horses. Charles is predeceased by his mother, Alma Mae Seymore, and his infant son, Henry William “Hank” Seymore. He is survived by his wife, Jacqueline Sherrets Seymore of the home; daughter, Toni Seymore Jenkins (Alan) of Whitmire; four grandchildren, Victoria Ellen Jenkins, Dutch West Jenkins, Charles Austin Jenkins, and Garrett Oxner Jenkins; two sisters, Dorothy Nobles and Virginia Edwards (Harry); five nephews and three nieces. Funeral Services will be held Wednesday, February 10, 2021 at 2 PM at the Masters Baptist Church with burial to take place at Whitmire Cemetery. The family will receive friends prior to the service at the church from 1 to 2 PM. In lieu of flowers memorials may be made to the Whitmire Rescue Squad, 95 Main Street, Whitmire, SC 29178. Condolences may be expressed to the family at www.grayfuneralhome.com Gray Funeral Home of Whitmire

The family of Charles "Pop" Edward Seymore created this Life Tributes page to make it easy to share your memories.

Send flowers to the Seymore family.