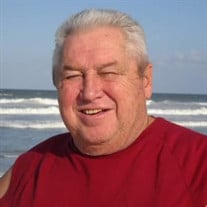 Bruce W. Chalk, age 71, died Tuesday August 25, 2020 at Prisma Health Heart Hospital after a brief illness. Mr. Chalk is survived by his wife of 51 years, Ginger, two children: Kevin A. Chalk of Joanna, and daughter Alisa M. Alexander (Trent) of Myrtle Beach, and one brother, Joseph Chalk of Myrtle Beach. He also leaves behind five grandchildren: Brett Chalk of Grand Prairie, Ontario, Canada, Ryan Chalk of Joanna, Adam Chalk of Lithia, FL, Merrick Alexander of Myrtle Beach, and Presley Alexander of Myrtle Beach. Mr. Chalk was predeceased by his sister Reba Haupfear of Clinton, his brother Kenneth Chalk of Kinards, and his sister Miriam McMurray of Sumter. He also leaves behind many nieces, nephews, and cousins. The youngest child of Thomas and Sallie Chalk, Bruce was born and raised in the small mill town of Joanna, SC. Bruce was a proud veteran of the United States Air Force, having served his country for 20 years before retiring in 1988 to Irmo, SC. He was an avid sports fan and passionately coached his squadron softball team for over a decade while serving in the military. Funeral services will be held Saturday August 29th at 1:30 p.m. at Breakthrough Tabernacle Church (formerly Webb Memorial Pentecostal Church) at 120 Whitmire Hwy. in Joanna, followed by burial with full military honors at Pinelawn Memorial Gardens. The family will receive visitors at the church from noon until 1:30 p.m. In lieu of flowers memorials may be made to honor his great nephew Haddon Norris, to St. Jude Children’s Hospital, 501 St. Jude Place, Memphis, TN 38105 or www.stjude.org or Wounded Warrior Project www.woundedwarriorproject.org Condolences may be expressed to the family at www.grayfuneralhome.com Gray Funeral Home of Clinton

The family of Bruce W. Chalk created this Life Tributes page to make it easy to share your memories.

Send flowers to the Chalk family.