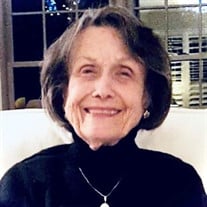 Renowned South Carolina watercolor artist Betty Koty Walker passed away peacefully on January 4, 2021 at the age of 93. Devoted wife of Dr. James L. Walker and active mother of four sons, her life ended surrounded by them all at her bedside... View Obituary & Service Information

The family of Betty Koty Walker created this Life Tributes page to make it easy to share your memories.

Send flowers to the Walker family.