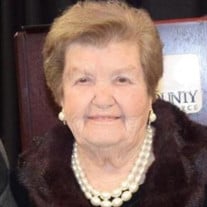 Almeda (Meda) Jacks Rogers, 99, went to be with the Lord on Wednesday, August 19, 2020. Daughter of the late A.B. and Polly Jacks, she is predeceased by her husband of 61 years, Philip Wiggins Rogers, son Phil Jr., brothers A.B. Jacks Jr., James Jacks and Ert Jacks and sister, Madge Robbins Waldrep. She is survived by her daughters, Mrs. Virginia Rogers McMurray (John), Dr. Almeda Rogers Jacks (Putt) and son, Mr. Alex Rogers (Adair); six grandchildren: Dr. Jay McMurray (Marnie), Mrs. Heather McMurray Rogers (Scott), Mr. Philip McMurray (Kaysi), Mr. Dean Rogers (Chelsea), Mrs. Ali Rogers FauntLeRoy (Wills), Mr. Errett Jacks, and 10 great-grandchildren: Wiggins, Jennie Margaret and Davidson McMurray, Kaitlyn and Jason Rogers, Luke, Abby and Emily Gray McMurray, Everly Rogers and Noah FauntLeRoy. Meda attended Bailey School, a one-room schoolhouse on what is now Brown Road, where she and her siblings walked the 4 miles roundtrip each day. When she was 14, she drove the “school bus”, the family car with no brakes. She graduated from Laurens High School and went on to receive a BA in Business Administration from Presbyterian College where she met her future husband, Philip. They married in 1942 before a minister in a small church in Columbia as he was preparing to report for military duty. He landed on the beach in Normandy on D-Day before coming home when the war ended to begin family life with Meda. A lifetime member of Leesville Southern Methodist Church, Meda served as a Sunday School teacher, Bible School Director and Women’s Missionary Society officer. After working at both Presbyterian College and Whitten Center, she went back to school and got 18 graduate hours so that she could become a teacher. She began her long-time teaching career in 7th grade math in both Clinton and Laurens. She was a member of Alpha Delta Kappa teachers’ sorority and was a charter member and served for many years as president of the Beta Chapter of the Laurens County Educators Association. She was a charter and life-time member of the Sunbonnet Garden Club. Meda, or MeMa as she was known by her family, was famous for her hospitality. No one ever left her house hungry or without leftovers in their hands, her specialties being chicken pie, pineapple cake and chess pie. Every Christmas she made peanut brittle and at Valentines she made individual heart cakes for the entire community. She also spent her summers making jelly and pickles. MeMa loved the Clemson Tigers! She spent many of her Saturdays in the fall with her family in Clemson, watching Clemson football! She was someone who loved her family and friends with a passion and was happiest when they were all with her at her home, especially for Sunday dinners. Meda’s family would like to thank the staff at Carolina Gardens for the outstanding care she received for over two years. The staff has treated her with kindness and compassion, just as if she were part of their family. A private celebration of her life will be held at Leesville Southern Methodist Church and she will be buried in the church cemetery. In lieu of flowers memorials may be made to the scholarship that the Rogers family started for Phil Jr., in 1990. The scholarship is the Phil Rogers, Jr. Memorial Scholarship, in care of Don Adams, 2021 A.B. Jacks Rd. Clinton, SC 29325.

The family of Almeda Jacks Rogers created this Life Tributes page to make it easy to share your memories.

Send flowers to the Rogers family.