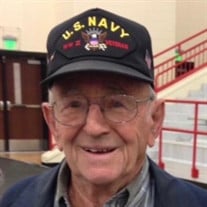 Dateline – Clinton, SC Alfio Rino Undari passed away Saturday, October 17, 2020, after a brief illness. He was born in Torrington, CT, on December 14, 1926, the younger son of Mary Saporite Undari and Peter Undari. He was predeceased by his parents, his brother Adolph, and his wife of 68 years, Margaret Stickney Undari. Alfio attended schools in Torrington, CT, until December 1944, when he enlisted in the Navy to serve in World War II. He was very proud of his military service and was honorably discharged as Seaman Second Class (AOM) USNR on July 11, 1946. Shortly after his discharge, Alfio attended engineering school and began his career with the Torrington Company. A few years later met his future wife and married on July 1, 1950, in Torrington. In January 1962, Alfio, Margaret and their four children moved to Clinton, SC, where he transferred in as a Project Engineer and was instrumental in starting the Torrington Company/Clinton Bearings Plant. Prior to his retirement from the company in 1990, Alfio spent several years traveling both regionally and internationally as a Technical Advisor for Torrington International. Alfio was a member of Saint Boniface Catholic Church since 1962, during which time he served the church in many capacities: budget and finance, physical plant, and church management. Additionally, he was very active in his community helping with Junior Achievement, Campfire Girls and American Legion. During his retirement, he enjoyed many trips to his beach house, spending time with his large family, working in his garden and doing odd jobs in his workshop. Alfio is survived by his children: Susan Young (Jimmy), Donna Brehmer (Larry), Peter Undari (Melinda Cunningham), all of Clinton, and Anita Hicks (Michael) of Chapin, SC. Also surviving are grandchildren, Jim Young (Jennifer), Jeffrey Young (Ashley), Judson Brehmer (Kirsten), Bill Brehmer (Cailla), Jennifer Undari, Michael Undari, Jordan Hicks(Ginger), and Ryan Hicks; five great- grandsons and four great-granddaughters. A private service will be held at a later date. Memorials may be made to Saint Boniface Church, 401 N Main St. Joanna, SC 29351 or Hospice of Laurens County, P. O. Box 178, Clinton, SC 29325. The family wishes to thank his caregivers, Allen and Alma, who helped him in his home the last two years. Condolences may be expressed online at www.grayfuneralhome.com Gray Funeral Home of Clinton

Dateline &#8211; Clinton, SC Alfio Rino Undari passed away Saturday, October 17, 2020, after a brief illness. He was born in Torrington, CT, on December 14, 1926, the younger son of Mary Saporite Undari and Peter Undari. He was predeceased... View Obituary & Service Information

The family of Alfio Rino Undari created this Life Tributes page to make it easy to share your memories.

Send flowers to the Undari family.